✅ This Waterpulse Water Flosser uses a motor and pump to produce a stream of pressurized, pulsating water to flow from a reservoir and exit through a narrow mouthpiece.

✅ This targeted water stream serves as a liquid jet of dental floss to help remove food from teeth and gums.

✅ In addition to cleaning your teeth thoroughly, the water flosser also gently massages and cares for your gums. A water flow will comfortably stimulate and massage the areas of concern on your gum. WHY DENTIST RECOMMEND THIS people are currently looking at this product

I ordered this to replace the Waterpulse Ultra Flosser. I noticed that the hose in the old one seemed to have mildew in it, as it came out of the hose. ewww.
I could have replaced the hose, but I could not tell if the inside of the actual machine was clean, so I decided to replace it.
I like this one so much better for this reason: Both Flossers have buttons on the handle that stop the water from coming out. On the Aquarius Flosser the button is a switch, so you don't have to hold it down, you just push it on when you are ready.
This allows the water to flow for a few seconds to clear any standing water and let the warmer water come out.
Then you can switch it off, until you get the tip in your mouth.
Both buttons did the same thing, but in the Ultra Flosser it was easy for my finger to slip off the button and spray me.
I have used Waterpulse Flossers for years.

I love to Waterpulse! Purchased in November 2019, after an older Waterpulse wore out after about 9 years of almost daily use. Unfortunately, the motor on this one stopped working a few weeks ago for some reason and I was very reluctant/hesitant to bother with a warranty claim, as it always seems like a hassle. So I started shopping other brands. I also decided to take a chance and reach out to Waterpulse to see what their warranty experience was like. To my pleasant surprise, Waterpulse was gracious, and after answering a few simple questions, they agreed to send a replacement unit! Nice!! Made my day!! Thank you, Waterpulse!! 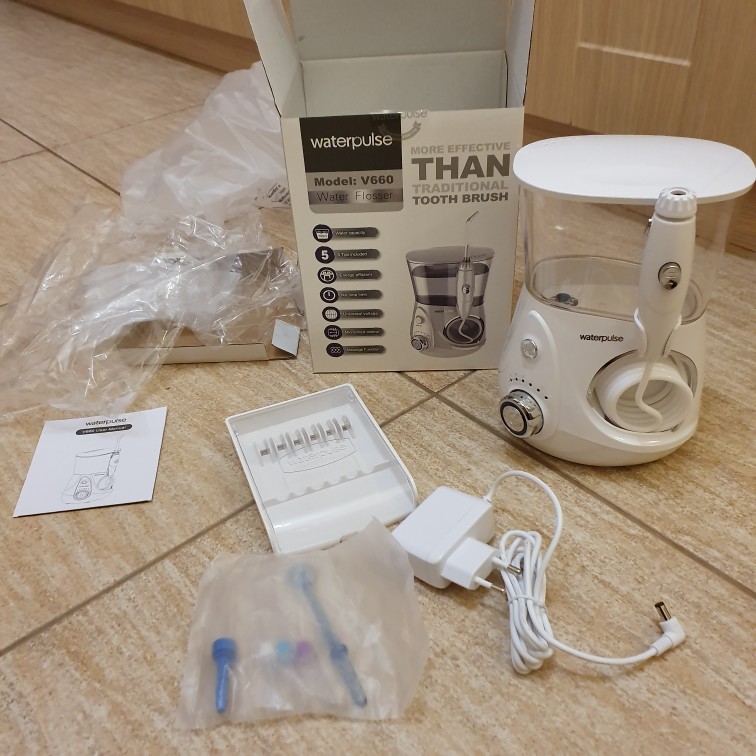 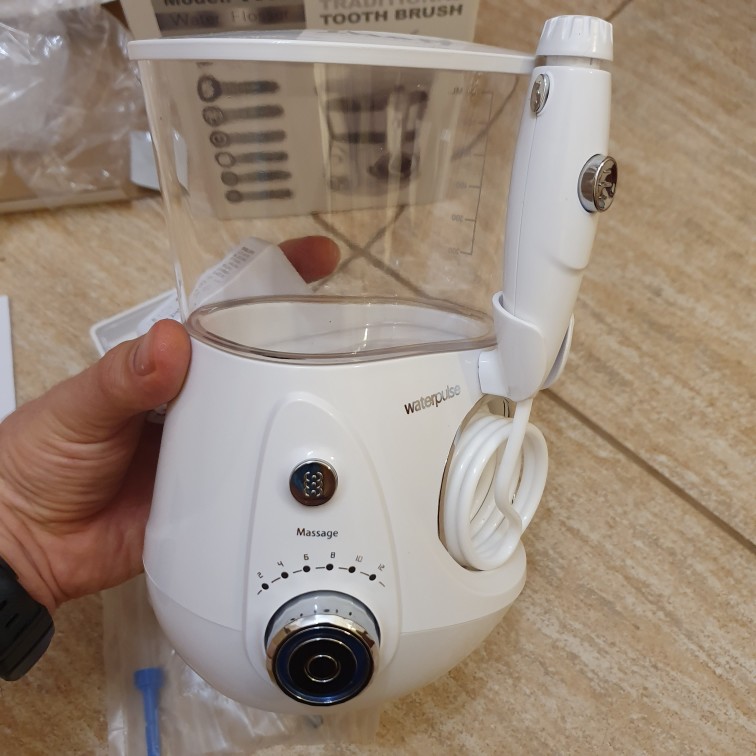 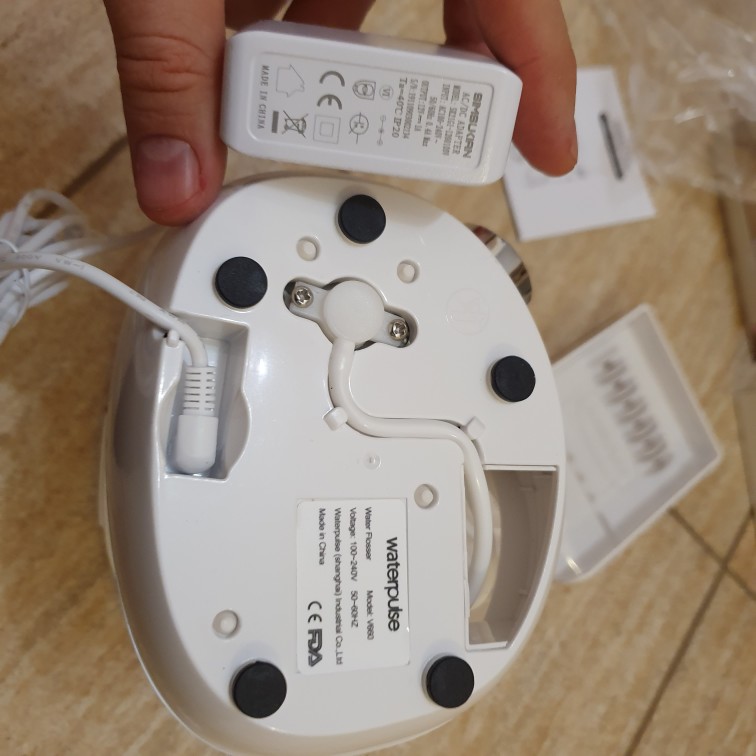 M
Margarete Roob
love it, buy it you won't be sorry

I have been using this for a couple of months now and have to say I love this Waterpulse. I have had dental work done and I put a little salt in a glass with some warm water and mix then put in my Waterpulse. This really helps with healing my gums and keeps food out of any spaces that can get food stuck. The flosser part works great and you will not be disappointed. The only negative I can find is I wish it had a place to store the spare pics/flosser tubes. I currently have them in a tall shot glass so my hubby can find his easily and not use mine ;) I would purchase this again if needed. Please click yes if this review helped you in any way. Thanks

K
Kelly Bogan
Wow! Should Have Bought This Years Ago!

Fifty-odd years ago when I was a kid, my parents bought Waterpulses for me and my two brothers. Over the years mine got lost during moves for school and work and, frankly, I'd forgotten about it. A couple years ago, I started having problems with sore/bleeding gums and--no matter how often I brushed--my mouth always felt like the bottom of a birdcage. Then, I remembered my childhood Waterpulse. Just in time for one of Amazon's sales!
I ordered the Aquarius model, and have used it twice-daily for a week. Guess what? No more bleeding gums! And after every use, my mouth feels like it was cleaned by a dental hygienist. Love, love, love this thing, and it's super easy to use!
After reading numerous reviews here, I have to say that it makes a low, vibrating noise when in use but it's not loud (I have hyper-sensitive hearing and can't bear loud noises). If your unit gets moldy, it's because you didn't take 30 seconds to empty the tank and drain the line after each use. Try adding a couple ounces of mouthwash into the water tank when you use it and--just like you can your coffee maker--once in a while run some white vinegar thru the tank followed by two tanks of clear water. It's not rocket science.
Those who reported it "leaking" from the bottom of the cleaning tip probably just didn't have it seated correctly. It has to snap into place on the wand, but if you aren't paying attention and press the "release" button on the wand instead of the "on" button to start the water flowing then, yeah, it'll leak from the bottom. Just snap it back into place and give your Therapy Llama a break.
Water going everywhere? Don't turn it on until the cleaning tip is in your mouth, and then keep your mouth closed around it like you're supposed to.
Seriously folks, I used one of these when I was seven years old and didn't have any of these problems.
Buy one. You'll love it. I'll never be without a Waterpulse again!

this Waterpulse is amazing. So I had 4mm and 5mm periodontal pockets from not flossing and also experienced some bone loss, I also had to get a very uncomfortable deep gum pocket cleaning. I literally hated flossing and would find myself avoiding to floss even though I needed it very much. My gums were red, swollen, and inflamed because I was in the early stages of periodontal disease. I started using the Waterpulse flosser, and instantly like this way of flossing much better! After using it consecutively each night for only 5 days my gums were noticeably better and felt much better. After 2 weeks of using the Waterpulse flossing, coconut oil pulling, and mouthwash treatment, my gums have done a complete 180 and my mouth and gums are starting to heal properly! Also this flosser can be somewhat loud, but definitely gets the job done ( but the dentist still recommends string flossing). Brought this with my own money and this is an honest testimonial/review. I will be back with an update on what mm my gum pockets will be!